1. Could a Meteorite Really Have Killed a Bus Driver in India? 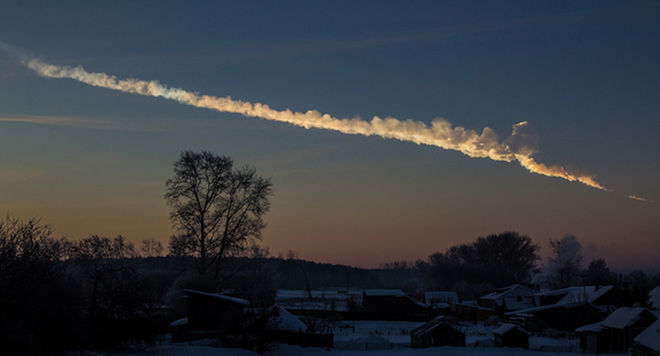 There is nothing more certain in life than death – a cheerful thought for a dismal February. Even though we are aware of that inevitability, we don’t expect death literally to strike out of an empty sky, which reportedly is what happened to Kamraj, a bus driver in Vellore, a town in the Indian state of Tamil Nadu.

2. Don’t forget to find out what’s up this month. You can see five planets in the morning sky, Comet Catalina and more.

February mornings feature Mercury, Venus, Saturn, Mars and Jupiter. The last time this five-planet dawn lineup happened was in 2005. The planets are easy to distinguish when you use the moon as your guide.

Discover when and where to look up: http://go.nasa.gov/1nZF3Fq

3. Scientists to provide update on the search for gravitational waves

This year marks the 100th anniversary of the first publication of Albert Einstein’s prediction of the existence of gravitational waves. With interest in this topic piqued by the centennial, researchers from UK universities in Glasgow, Birmingham, and Cardiff will discuss their ongoing efforts to observe and measure cosmic gravitational waves for scientific research at the Science Media Centre in London starting 3pm GMT on Thursday, 11 February.

Simultaneously in the US, the National Science Foundation is gathering scientists from Caltech, MIT, and the LIGO Scientific Collaboration (LSC) at the National Press Club in Washington, DC for a status report on the effort to detect gravitational waves — or ripples in the fabric of spacetime — using the Laser Interferometer Gravitational-wave Observatory (LIGO).

LIGO, a system of two identical detectors carefully constructed to detect incredibly tiny vibrations from passing gravitational waves, was conceived and built by MIT and Caltech researchers, funded by the National Science Foundation, with significant contributions from other U.S. and international partners. The twin detectors are located in Livingston, Louisiana, and Hanford, Washington. Research and analysis of data from the detectors is carried out by a global group of scientists, including the LSC, which includes the GEO600 Collaboration, and the VIRGO Collaboration.

Gravitational Waves are, in their most basic sense, ripples in spacetime. Einstein’s theory of general relativity predicted them over a century ago and they are generated by the acceleration (or, indeed, deceleration) of massive objects in the cosmos. 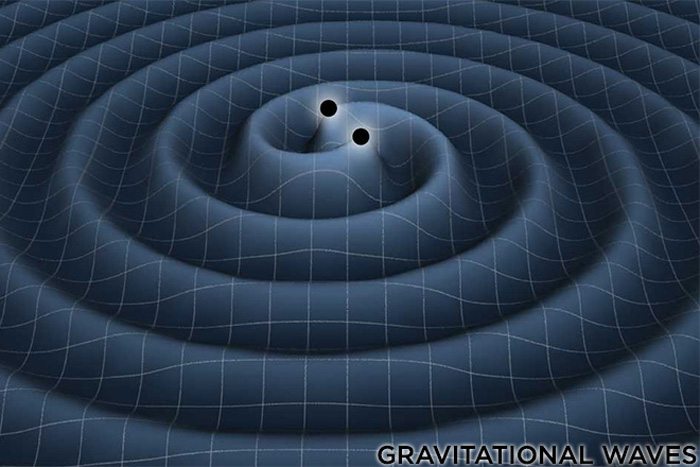 Gravity Waves are physical perturbations driven by the restoring force of gravity in a planetary environment. In other words, gravity waves are specific to planetary atmospheres and bodies of water.

In the case of atmospherics, as air blows across an ocean and then encounters an island, for example, that air will be forced to rise. Downwind from the island, the air will be forced to a lower altitude by gravity, but its buoyancy will work against gravity forcing it aloft again. The result is often a region of oscillating air in the atmosphere that can produce clouds in the waves’ crests (or highest points) as moisture from lower altitude condenses. Also, in the case of oceans, surface gravity waves form at the atmosphere/water interface; wind blows the surface out of equilibrium causing the restoring force of gravity to force the surface back down, while the water’s buoyancy pushes it back up. Wind-driven waves, tides and tsunamis are all examples of gravity waves. 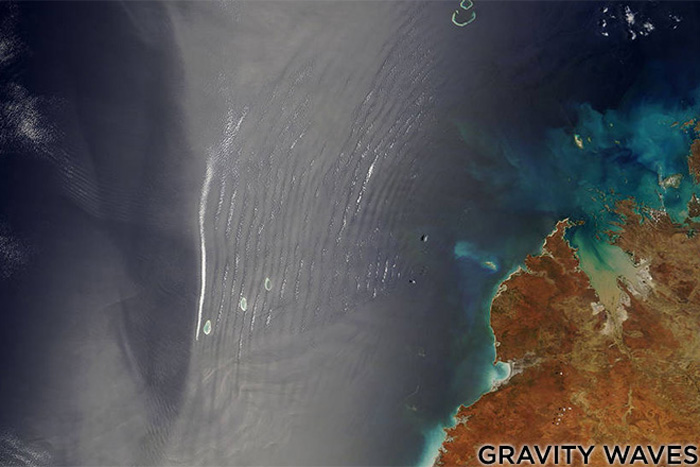 So, the upshot is that gravity drives both gravitational waves and gravity waves, but they have very different properties that shouldn’t be confused. 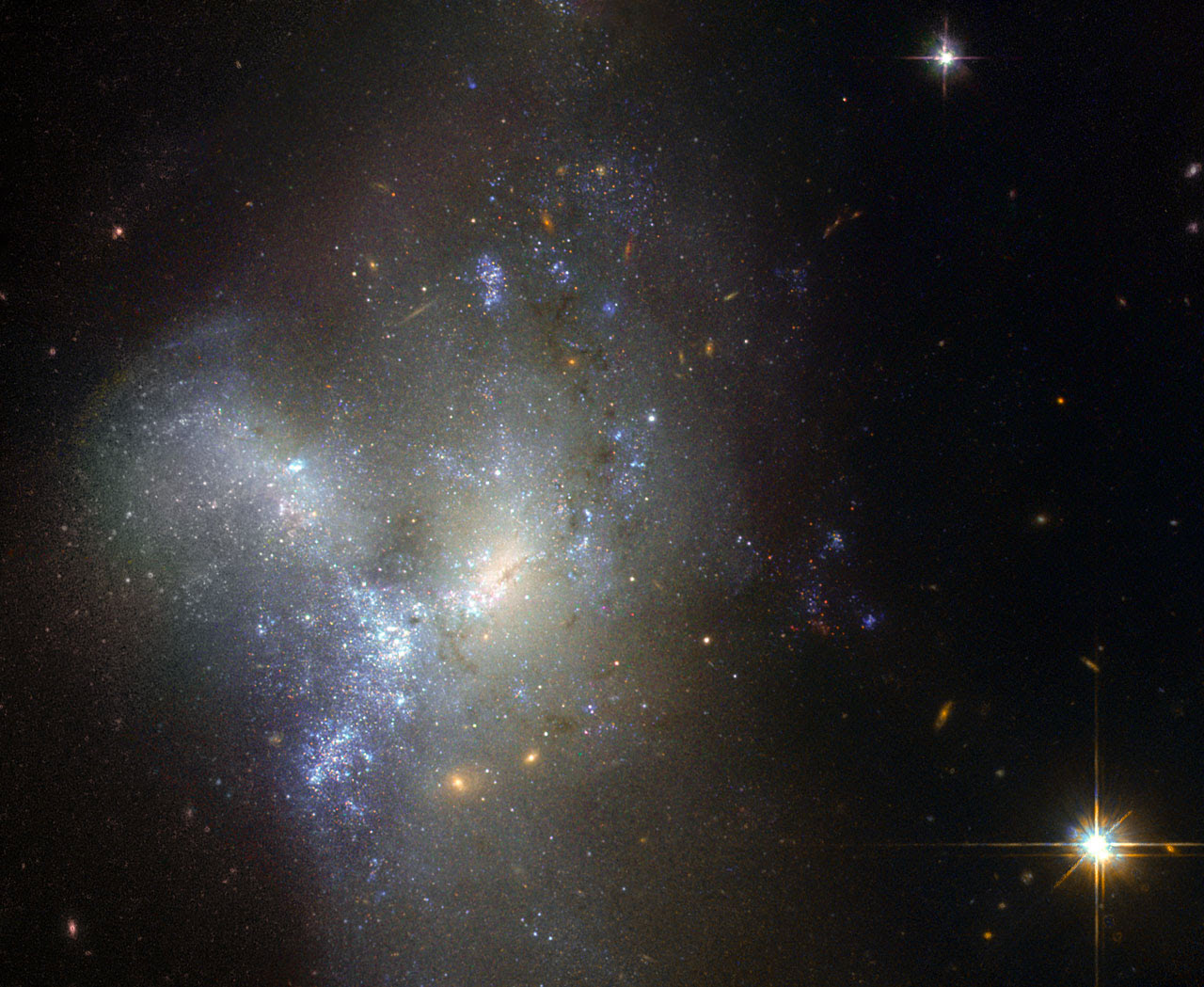 This image, taken by the NASA/ESA Hubble Space Telescope, shows a peculiar galaxy known as NGC 1487, lying about 30 million light-years away in the southern constellation of Eridanus.

Rather than viewing it as a celestial object, it is actually better to think of this as an event. Here, we are witnessing two or more galaxies in the act of merging together to form a single new galaxy. Each galaxy has lost almost all traces of its original appearance, as stars and gas have been thrown by gravity in an elaborate cosmic whirl.